Why We Use Treats For Training 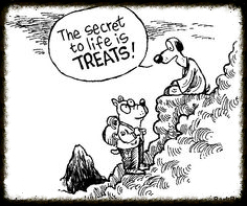 You don't want to use treats to train your dogs because you think:

But the thing is this.  You’re wrong.  And you’re wrong in both senses of that word.  You’re inaccurate because you’re firing moral psychological software, evolved for social interchange in humans, at a dog, who will never be molded into an upstanding member of society.   And in spite of your good intentions, you’re morally wrong because you will inevitably end up employing pain and fear to motivate him.  The science is there and the consensus of every reputable professional organization has converged on its findings: pain and fear are detrimental and inhumane, and don’t instill moral goodness in your dog.  They just terrorize him into doing more of what you want.   But you will say this method works.....but only up to a point. What you see is an illusion. He won't thank you. He'll never do what is right because it's right. He'll just keep wishing you would stop scaring him. Dogs that are taught through fear can very easily ignore or forget when not with their trainer. They can end up in a state of "learned helplessness" where no matter what they do, they cannot escape the punishment so they just sit and take it. And for the worst part, they can turn on the trainer or redirect their frustration on to another person or animal.

When we are training our dogs, we are not teaching them species-appropriate behaviours, unless you are embarking on a behavioural modification plan where a trainer would use your dog's own body language to alter its behaviour. In general dog training for obedience however, we are often asking the dog NOT to engage in his species-appropriate behaviours e.g stop chasing, stop barking. We're asking him to do something at odds with his behavioural programming.  And for that to work, we have to make it worth his while.  Much as you would if you were asking your child to clean their bedroom or sit still on the bus. Praise is very important and I always include it in my training sessions but it simply won't be enough for a dog to get the ball rolling. Our dogs live and learn in the moment so we need to make those moments as memorable, fascinating and as fun as we can to be successful.

The reward for children behaving in a socially acceptable way is social - they make friends, people are nice to them, others think highly of them.  All this can be understood by a human brain and has value, to a human.  Dogs have no concept of all those subtle social human interactions and to suggest or think that they do is the ultimate in anthropomorphism (putting human values on animal behaviours).

When you are training with food always remember to include it in your dog's daily food allowance. This way you can ensure your dog maintains its body weight. Always start with the most boring treat possible such as your dog's own kibble and work up to nicer treats, such as chicken, cheese, sausage or ham, when teaching more difficult behaviours. Imagine if you offer your child £20 to do a chore when you might have gotten away with offering them a later curfew. Always have something to bargain with. The best way to train with food is to not feed your dog at his regular time and then offer him his food in a training session. This works particularly well for Recall.

We generally regard food as the only treat that can be offered. There are alternatives to food including a favourite toy, a game of tug, a doggie wrestle, a tummy tickle or being taken out for a walk or whatever it is that will motivate your dog to perform correctly. You just have to figure it out. Make a list of the 5 foods he would choose to eat it offered,  5 toys with which he are regularly plays and 5 things they like to do or have done. Put the results in order of your dog's preference. Now you have a huge list of treats that you can offer your dog depending on what you want him to do.

Remember this rule: Right Treat for the Right Training at the Right Time 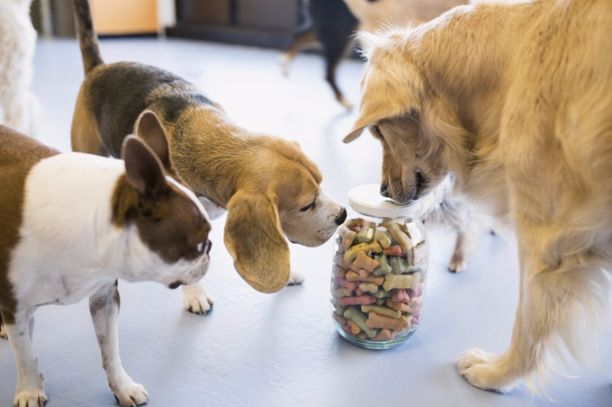 I can only accept dogs for walking that have had a Kennel Cough Vaccination.

I can provide dog treats that are gluten free for dogs with sensitive tummies.

My poo bags are biodegradeable.

All dogs, by law, should wear a collar and a tag bearing the name and address of its owner.

To Be Sure Your Dog  Has Great Craic 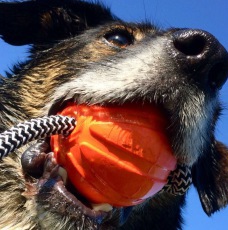 Print | Sitemap
© To Be Sure Pet Services
Login